The Legends of Naga Part 4 – Crossing The Inter-Dimensional Barrier

. In this article, we will explain the significance of these mystical verses, and shed light on the source of its power.

The Cultural Significance and Origins of the Spell

These 4 Noble Truths were first disseminated via the Dhammacakkappavattana Sutta

; the pivotal post-enlightenment sermon delivered by the Buddha to the 5 ascetics, his former palace associates who had followed him on the path towards enlightenment. This event is often referred to as “Setting the Wheel of the Dhamma in motion”.

According to the Sutta, this event took place in a park at Isipatana

, near the city of Varanasi. The Buddha gave the sermon in the evening of the full moon day, in the month of Asalhi (a form of Nepalese calendar), which in today’s Roman calendar, usually happens somewhere in July. This event is celebrated annually as Asalha Puja Day (or Asanha Puja อาสาฬหบูชา in Thai). This festival celebrates the Buddha’s first sermon (The 4 Noble Truths) and the founding of the Sangha (of which the 5 ascetics came to be the founding members).

The day after Asalha Puja, a period of intense meditation and scriptural studies begins for the monks. They undertake a 3-month-long period of spiritual asceticism known as the Buddhist Lent (also referred to as the Rains Retreat, Vassa

or Khao Pansa in Thai). This culminates in a festival called Kathina, where Buddhist devotees offers robes and other requisites as gifts to the monks. The day of celebration differs from temple to temple, as they are free to select their own day within the month.

One of the passages recited during the Kathina ceremony concerns the immensity of the merit that results from performing Kathina; “Even a rock, a diamond, or the earth itself may tremble or shatter, but the merit made by offering a Kathina robe may not be shaken by anything or anyone, and it will endure until Nibbana

, the end of it all”. This is the source of the name “Kathina”, which means “Unshakeable”.

The 4 Noble Truths as expounded by the Buddha are:

is an abbreviation for Samudaya, meaning the underlying truth regarding the origins of suffering; desire, craving, clinging and aversion. As long as humans remain ignorant to them, they will suffer under the weight of longing and illusory pursuits. Should they choose to develop their minds through studying the Dhamma however, and practice mindfulness and meditation, they will begin to peer through the fog at the universal truth. They truly come to comprehend the Buddha’s teachings regarding suffering and the impermanence of life. Overcoming craving and ignorance will lead to true happiness and enlightenment.

is an abbreviation for Nirodha, or the cessation of suffering. To end suffering, is to remove all desire, ill will and ignorance. Once we transcend these root causes, we may experience absolute happiness, perfect wisdom, peace, and all the qualities of liberation.

is an abbreviation of Magga, or the path leading to the cessation of suffering. This is also called “The Middle Path”. To follow the Middle Path, means toeing the line between extremes, and to follow a moderate way of life. The Middle Path is a Noble Eightfold Path involving the understanding and practice of Right Views (Understanding), Right Intention, Right Speech, Right Conduct, Right Livelihood, Right Effort, Right Mindfulness and Right Concentration. These eight elements span three broad practices; Virtuous Conduct, Mental Development, and Wisdom. The goal of the Noble Eightfold Path is to bring true understanding of the Four Noble Truths, and help adherents achieve the correct goal – the end of suffering.

The recitation of this spell, therefore, channels power from 1) the enlightenment of the Buddha, 2) the expounding of truth from the Dhamma, and 3) the virtues of the formation and existence of the past, present and future Ariya Sangha

, and 4) the partaking of merit by offering to the Sangha (who devoted their life to eliminating desire, ill-will and delusion plaguing all beings). When recited with virtue and understanding, this spell can overcome the most terrifying of evils, and drives away all inauspicious events.

This spell may be written 4 ways;

This spell is used to sanctify amulets centred around protection, by being inscribed onto them. It helps to promote balance, happiness, peace, and strength in life. It also helps people to overcome their enemies, as well as themselves.

(the heart of the Four Noble Truths in English) and the Katha “Du Sa Ni Ma”. 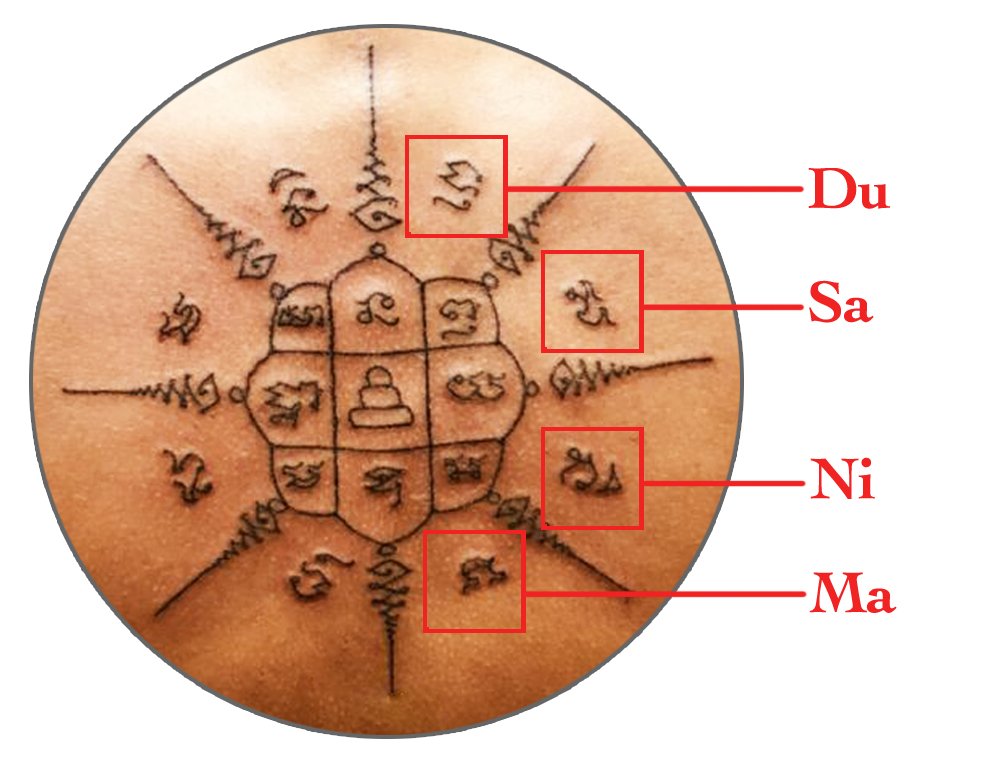 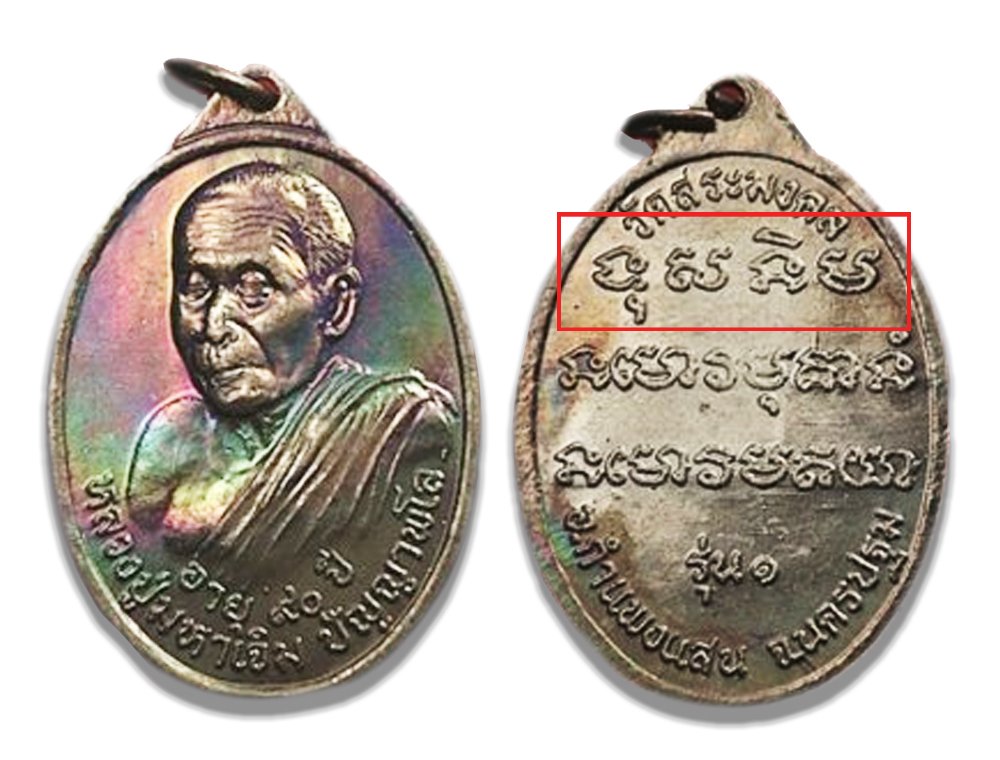 , owing to their similar spelling, only differing in the order of their syllables. The Katha Huajai Ariyasatsee is spelt “Du Sa Ni Ma” and the Katha Huajai Pathamang, “Du Sa Ma Ni”.

Katha Huajai Pathamang imbues outstanding levels of invulnerability, as they invoke the 16 characters of Du Sa Ma Ni, Sa Ma Ni Du, Ma Ni Du Sa, and Ni Du Sa Ma. It is believed that if consecrating weapons and armor with this spell, renders a user impervious to all harm.