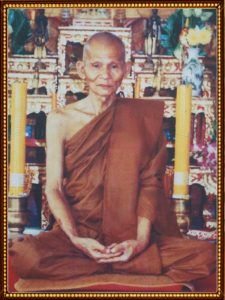 (Phra Soonthorn Thammakorn) of Wat That Mahachai Temple, Mahachai Sub-district, Pla Pak District, Nakhon Phanom Province, is a Geji who is equally renowned for his mastery of sorcery and for his pursuit of virtue. He is widely-known throughout Thailand and revered by a litany of disciples who have received his personal tutelage.

Luang Pu Kamphan was born on 10th January, 1915. His secular name was Kamphan Srisuwong, and he was born to Mr. Ken

On 7th September 1932, at the age of 17, he ordained as a novice monk at Wat Sriboonreung

When he was 20 years old in 1935, he ordained as a monk at Wat Phra Phutthabat Chom Thong Temple

In 1939 however, when Luang Phor Kamphan was only 24 years old, tragedy struck. His mother passed away, leaving him with no choice but to leave the monkhood, in order to care for his two young sisters.

The secular life, however, was not for him. A few years later, at the age of 30, Luang Phor once again returned to his true calling in the Sangha. He once again ordained as a monk, settling into Wat Pah

(a temple located deep within a forest) for 3 Pansa. He then left the temple to teach meditation at Wat Phra Phutthabat Chom Thong.

, he delved into even more advanced subjects, such as studying the ancient Dhamma alphabet and Khmer alphabet. He performed many virtuous deeds seeking to further social and religious causes, from founding a village, to raising Buddha statues for worship and inspiration, and perhaps most memorably, creating amulets to help support and sustain the lives of his devotees. These became a lifelong mission for him, which he gladly undertook right up until breathing his last in 2003, at the ripe old age of 89.
There is a multitude of stories involving the supposed miraculous nature of events surrounding Luang Phor’s life, many of which are supposedly first-hand accounts from his disciples. Here are some, which help illustrate the holiness of his pursuits.

The Miracle of the Sand

. At one point in history, the Lao People’s Democratic Republic was rife with a civil war which threatened to spill over into neighbouring Thailand. It became necessary to deploy military forces along the border, adjacent to the Mekong River, to prevent these potential adversaries from invading Thailand’s sovereignty.

One day a group of off-duty soldiers had heard about a Wat Pah (a term used to refer to a temple situated within a forest)  situated in Pla Pak district that was home to famous Geji. They set out to pay respects to the master. Seeking blessings and protection from the growing conflict, they implored Luang Pu Kamphan for amulets.

“I have nothing to give you, only the Dharma of the Lord Buddha to give,” he said. The soldiers, however, were persistent, seeking the master’s assistance with protecting them from any harm, which would surely disavow them the ability to protect their country. Finally, the master relented, asking them to retrieve some sand from the riverbank.

The next day, a group of soldiers, this time accompanied by curious villagers, returned, bearing sand from the Mekong River. Luang Phor Kamphan blessed and consecrated the sand, and distributed it among all those present. He is said to have converted the sand through an alchemic process similar to the revered Chao Khun Nor

before him. Luang Phor Kamphan was considered a pioneer of the technique in Northeast Thailand, turning ordinary sand into amulets with the power to dispel danger and evil.

Inevitably, as the conflict waged on, the troops who had received the sand amulets, clashed headlong into violent conflict with the Laos troops. Astoundingly, not a single man was harmed in the skirmishes, unlike troops from neighbouring regiments who did not carry the amulets. From then on, soldiers, police and nearby villagers poured into his temple on a near-constant basis, seeking the holy sand. This caused Luang Phor’s renown to grow exponentially.

Luang Pu is considered to have well and truly pierced the veil of holiness in his spiritual practices, such that even ordinary grains of sand would be consecrated by his touch. In his later years, his famous Phra Kring amulets also contained sand from the middle of the Mekong River, which he regularly consecrated and added to the base of nearly all his amulets.

This story was reported by KhaoSod

news. On 26th March 2019, the police lieutenant Thanyalak Kamchomphu, Deputy Inspector (Investigation) of Muang Udon Thani police station, was informed of an accident involving a pickup truck that had overturned after crashing into a signboard along the bypass road near Udon Thani, in the direction of Sakon Nakhon. The driver of the car was trapped inside. She personally went down to inspect the accident site, after dispatching an ambulance from the nearby hospital to respond.

At the site, she saw a white Toyota pickup that had been flipped on its side, sprawled across a roadside ditch. The officers began to free the driver from the vehicle. The driver, 36-year old Watcharapong Faimeunwai

had been driving his company’s truck at the time, hauling a cargo of car window film.

While driving along the road, he was beset upon by torrential rain and sudden gusts, ruining visibility and making it hard to drive properly. Suddenly, a car loomed past him at high speed, causing him to swerve sharply to try and avoid it, colliding with the sign and flipping the car multiple times, before being halted by a ditch. 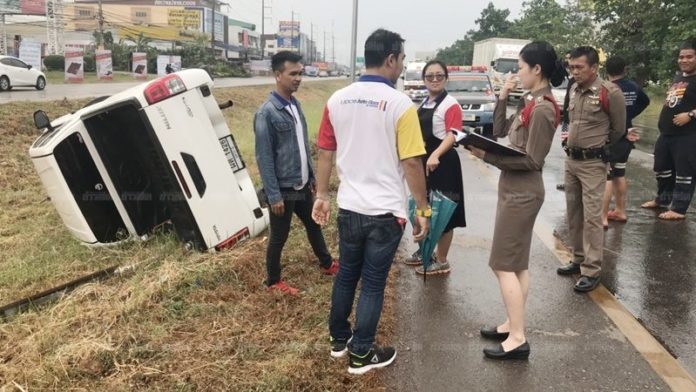 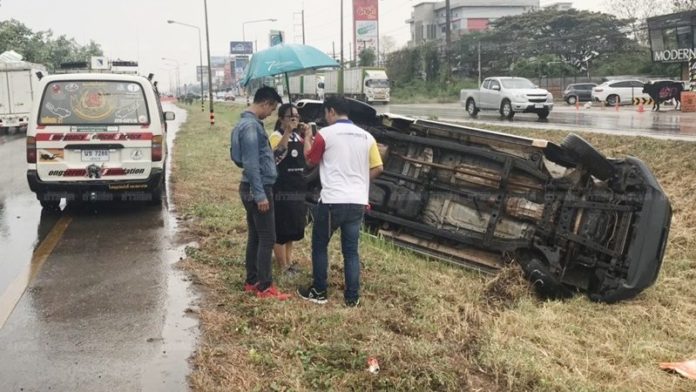 Watcharapong attributed his survival to the “Rian Luang Pu Kamphan

” coin that he carried with him at all times. He had obtained his coin from Wat That Mahachai Temple, Pla Pak District, Nakhon Phanom Province. Himself a native of Nakhon Phanom Province, he had full faith in the prowess of Luang Pu Kamphan. While travelling for work in Udon Thani Province, he was always careful to keep the Rian Luang Pu Kamphan on his person at all times.

About a one kilometer away from this accident, on the same day, a similar accident occurred due to the inclement weather. In this instance however, the driver was severely injured. 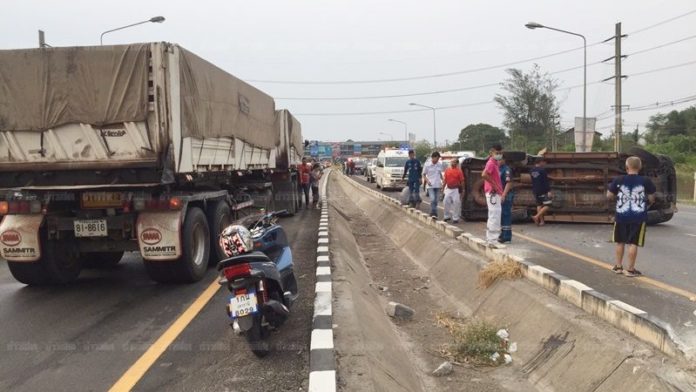 Perhaps it is sheer good fortune that saved Watcharapong Faimeunwai. Good fortune, afforded to him by his unshakeable faith in the master Geji, Luang Pu Kamphan from his hometown.

Both of these stories are simply examples of the dizzying number of accounts that exist from Luang Pu Kamphan’s lifetime. The true source of miracles however, are hard to pinpoint. Perhaps it gets a little easier, when a miracle happens to you. Please follow our other articles, for more astounding stories from the world of Wicha.