In our previous article, we explored some compelling modern evidence for the Nagas’

existence, and the stories surrounding these mystical sites.

In Part 4, we will explore some myths and legends that continue to shroud the Naga, both from the past and present.

Nagas of the Mekong River

is located in Udon Thani Province, Thailand. It is a peculiar island, situated in the middle of a river and covered in dense vegetation. Villagers in the area believe that Kham Chanot is a dimensional portal between the Human and Naga worlds.

The surrounding river is a tributary of the mighty Mekong, and it is widely believed that both these rivers are crawling with Nagas. The locals believe that their river is actually a dimensional pathway between the 2 realms, dug out by the Nagas. It is said that no one has ever drowned in this part of the river, as they are almost always saved by the mystical serpents guarding it, who fear human encroachment on their world.

Gateways of the Nagas

Legend (a legend about the Buddha’s Relics), an account is told of two Nagas named Phraya Suwan Nak and Phraya Suttho Nak (or people call Srisuttho), who resided in different parts of Nong Sae City.

“It is said that this was the origin of the Mekong Giant Catfish, which is endemic to the Mekong River.”

One day, the two Nagas became upset about having to share their resources, and a war erupted. They fought each other for 7 years, 7 months, and 7 days, causing trouble in all three worlds: the Heavens, the Human realm, and the Underworld.

Indra, the King of Deities, personally came to Nong Sae City to put an end to the war. He then promised a reward of a giant catfish for whichever of the two Nagas could finish digging a river first. Phraya Suttho Nak emerged victorious, and received the coveted prize. It is said that this was the origin of the Mekong Giant Catfish, which is endemic to the Mekong River.

Phraya Suttho Nak requested three interdimensional gates, that would serve as a link between the 3 realms. The first gate is within the grounds of Phra That Luang

, located at the center of Vientiane, Laos. Some legends claim that it is situated under Phra That Luang, where there lies a huge tunnel leading underground. This tunnel is said to be covered by the large golden Buddhist stupa of Phra That Luang.

The second gate is said to be located on Don Chan

in Laos. This is a large island in the middle of the Mekong River, situated opposite Sri Chiang Mai, Nong Khai Province, Thailand. People on both sides of the Mekong River believe that this is the site of one of the gates requested by Phraya Suttho Nak.

The third, and perhaps most famous gate, is located at Kham Chanot. Locals refer to the area as Wang Nakhin

, or ‘The Palace of Naga’. The island is overgrown with a peculiar species of tree called a ”Chanot Tree”, which purportedly may only be found on this island, and nowhere else on Earth. Chanot trees share characteristics with coconut, betel and palm trees. In the interior of Kham Chanot, lies a shrine and a sacred pond, believed to be the gate itself.

Some legends say that Indra allows Phraya Suttho Nak and his followers to transform into humans, and settle on Kham Chanot for 15 days during the Waxing lunar phase, where the Naga is known by his human name of Chao Phor Phraya Srisuttho

. During the proceeding 15 days of the Waning Lunar phase, he and his subordinates are to revert to their Naga forms, and return to their underground domain.

In Kham Chanot, there is a sacred pond referred to as the ‘Naga Chimney’. The depths of this pond are mystically unfathomable. In one instance, villagers attempted to measure the depth using 3 long bamboo trees tied end to end, but were somehow unable to touch the bottom. Oddly enough, the water in the pond stays clear enough to see coins that people have thrown in, strewn all over the bottom. The villagers believe that this pond is the gateway used by the Nagas to cross between realms.

Even more peculiarly, the water level in the pond seems to rise and fall with the tides of the Mekong River. On the 15th day of the waxing moon, of the 11th lunar month of the year, at the end of Buddhist Lent, orbs of light are often observed shooting out of this pond, as well as from the Mekong river. Large air bubbles rise as well, as if gargantuan creatures are breathing in the depths. The denizens of the area believe that this is the breath of the Nagas.

It is said that the water in pond is even capable of changing colours. It may even tinge itself yellow or red upon request, to convince skeptics of its spiritual prowess.

Because of the mystic nature of this pond, its water is said to be a cure-all, and is often collected for drinking, bathing, and even for purposes of worship, as it is believed to imbue a household with auspicious energies.

Interactions between Nagas and Humans at Kham Chanot

Throughout history, the Nagas of Kham Chanot have always been at the center of the lives of human residents. Festivals and funfairs dedicated to the Nagas are common throughout the year. Nagas are known to transform into human women and borrow weaving tools from the villagers. There is even an annual merit-making event where operators are hired to screen movies for the benefit of the Nagas. 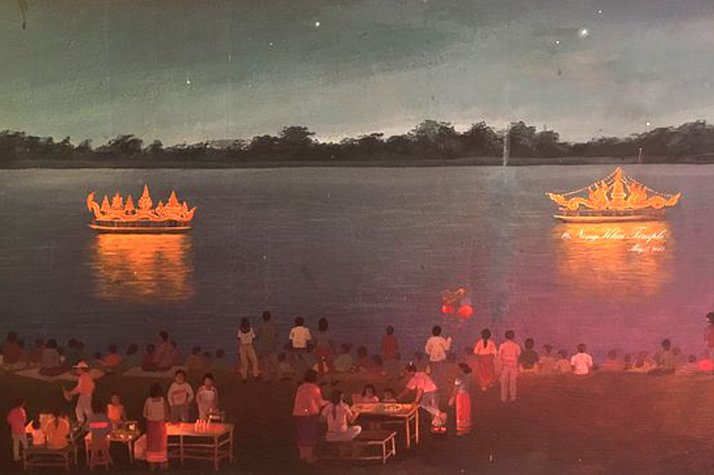 One strange event, in 1989, made the area famous across Thailand.

, known in the industry by his nickname, Hia Berm, was the owner of an open-air movie business. On this occasion, he recalled that he was hired by a certain “Mr. Champa Khamkaew” to screen a film at Kham Chanot. The screening was to take place on January 29, 1989, at Ban Wang Thong, Ban Dung District, around 100km away from Udon Thani province.

“There did not seem to be any people gathering to watch the movie, which was very unusual…”

When the crew arrived at Ban Wang Thong

village, someone came to pick them up, and escort them to the screening venue, around 3-4 kilometers away. They arrived at dusk. Mr Thongchai was a little suspicious at first, as he noticed that there were no booths or shops in the vicinity.

In those days, open-air movie screenings were almost always accompanied by a procession of small shops selling food and drinks, a meagre way to eke out a livelihood in these rural areas. Furthermore, there did not seem to be any people gathering to watch the movie, which was very unusual, as screenings like these were often the social event of the season in these small villages. Mr Thongchai began to suspect that he had been deceived, but chose to carry on anyway.

The film screened that night was a comedy. He could hear the audience laughing continuously. Everything went on as usual. At 4 am, someone brought the payment to him and told him to pack up and leave the place before dawn broke, or it would be difficult to leave the area. He instructed his crew to stop the projector and turn the spotlights on.

To his dismay, as soon as the lights were turned on, the entire crowd had disappeared almost instantly, and the area was dead quiet. He mused aloud at the odd occurrence, wondering what had happened to his appreciative audience. Where had they gone to?

Returning to Ban Wang Thong village, the crew were greeted by the villagers, who asked how their screening had went. Mr. Thongchai responded that they had just returned, pointing in the direction of the previous night’s venue.

The villagers were puzzled. They revealed, to his horror, that there were no villages anywhere in that vicinity, and that the roads there were impassable by vehicles. The area, as he then learned, was known as Kham Chanot, famous for being spirit-infested. The villagers playfully joked that the spirits themselves must have hired Mr Thonghchai to screen the movie.

It was rumored that after this incident, the entire open-air movie industry of Udon Thani Province refused to screen films anywhere in the area for quite a while.

“It is believed that the person who hired Mr Thongchai that fateful night, along with the entire audience, were Nagas who had transformed into human form.”

The curious case also led some intrepid villagers to investigate the area, where they found tire tracks matching the vehicles used by Mr. Thongchai and his crew. This shocked them, as the ground was troublesome to navigate, even on foot.

It is believed that the person who hired Mr Thongchai that fateful night, along with the entire audience, were Nagas who had transformed into human form. This was a common occurrence in the village, who themselves organized events to mingle with the Nagas. Female Nagas in attendance were often recognisable from their white tops and dark sarongs, and Male Nagas from their choice of red headdress.

Another legend tells of a Male pageant organised by one Chao Phor Phraya Srisuttho, in Kham Chanot City.

One of the participants was Mr. Khamta Thong See Leung

, a villager of Ban Wang Thong, Wang Thong Subdistrict, Ban Dung District, adjacent to Kham Chanot. It is believed that he was recruited by the legendary Naga Chao Phor Phraya Sri Suttho to take part in his pageant.

returned from the contest out of sorts. For a week after, he was totally unhinged, behaving erratically. His family and relatives invited a spiritual healer to resolve the crisis, as he did not display any medically-plausible symptoms. Believing him to be possessed by a spirit, his family and friends took turns watching over him during the healing process. However, Mr. Khamta still managed to disappear for around 6 hours at one point.

“He believed that she was a Naga from Kham Chanot.”

He returned totally cured, as if he had never been afflicted in the first place. He told his family stories about Kham Chanot City, about its beauty, and the weirdness of the underground city. Following this incident strange events began to plague his life, such as a mysterious woman searching for him, who he had met in his dreams many times, He believed that she was a Naga from Kham Chanot. She even began to appear to him in his waking hours, especially during rainy days.

The Naga appeared to want to whisk him away with her, back to Kham Chanot. He was afraid for the fate of his family. He believed that by becoming a monk, he could stop these strange occurrences from happening, as the Naga feared the Buddha. Mr. Khamta was eventually ordained at Wat Sirisuttho

Temple or Wat Non-Toom Temple, where he remained until his death in 1990.

Next, in our last instalment of the Naga legend, we retell the story of an encounter between a Naga and the esteemed Phra Ajarn Mun in Thailand.