Discovery of the Treasure

. The events leading to the discovery of the Gru were rather inexplicable. It was discovered by Luang Pu Sruang Sukhakamo, who was then the Zhao Awat of Wat Khao Phra Tai. The amulets that were discovered, were ascertained to have been created and blessed by Luang Phor Ngernof Wat BangKlan.

(also known as Wat Khao Phra Tai). At that time, Luang Pu had never even heard of the temple, much less been aware of its actual location. He was convinced of the serendipity of his premonition however, and located the temple, eventually making his way there.

While residing at Wat Khao Phra Tai, he had frequent dreams that there was a powerful force hidden in the ground. After a year, he even began to feel a great force emanating from the ground beneath him during his meditation sessions as well. His intuition told him that there were great and powerful objects to be unearthed beneath the temple.

One afternoon while he was wondering where this source of power was hidden, he witnessed a lightning bolt striking the old Sala. He immediately recognised the signifance of this omen. He contacted the Gamnan (title given to the head of the village) Somkuan Loong Piak

(Uncle Piak), Loong Auan(Uncle Auan), Phi Siam(Brother Siam) and Phra Ajarn Than, and requested their assistance with excavating the ground beside the Sala. After some digging, they caught a glimpse of something resembling a piece of phayant, covering what seemed to be a collection of amulets. They realized that they had stumbled upon the location of a Gru; a veritable treasure trove of holy artifacts.

The old Sala had been built in B.E. 2462. In the past, it was used to conduct lessons for the laity as well as monks. The Sala was left disused for a long time. In the process of unearthing the amulets, the Sala had to be removed. It was determined that the Sala would be rebuilt after the recovery of the artifacts had been completed.

Digging into the foundations of the Sala, the group discovered 3 layers of hidden amulets of various forms, stashed up to 6 metres deep into the ground. There were a plethora of pots and urns within, containing many types of amulets such as Phra Pikanet, Phra Lersi, Phra Pidta, Luang Phor Ngern and many more. Some were made of soil, some were made of metal.

After consolidating the finds, a rough estimate put the number of amulets found at close to 84,000 pieces. The urns were found to contain various types of amulet, for example, in some urns, 80% were amulets made of soil, the middle 10% contained amulets made from lead or a mixture of metallic amulets, and the top 10% contained gold amulets.

Luang Phor Ngern was known to travel to many places to heal the sick, as well as assist temples to raise funds for building temple facilities such as Sala, Ubosot etc. He owned 3 elephants, affectionately named Nop, Nap, Singh, and 2 horses.

,or Uncle Yuak, who was alive during his time (reputed to be around 100 years old in B.E. 2553) stood witness to the events which happened at that time. He was around 8 years old in B.E. 2462 when he joined the school at Wat Khao Phra Tai (also known as Wat Sri Phrom Jariyawas).

. In B.E. 2460, Loong Yuak saw many people joining a Lor Phra ceremony. His father told him that Luang Phor Ngern was blessing the amulets to raise funds to build a Sala. Some of these were buried in the ground where the Sala was built. It is a Thai belief that auspicious objects are often burrowed below the ground of a building before it is constructed, to bestow it with protection and auspiciousness.

Luang Pu Sruang had since passed on, and was conferred the position of Zhao Awat to Phra Atikan Somporn Khun Yutatoh

Offerings to Luang Phor Ngern are ideally given on Tuesdays, Thursdays or Friday, and should feature 9 lotuses, 9 necklaces of jasmine flowers, 3 betel nuts (also known as “Mark” in Thai), 3 betel leaves (also known as “Pru”), 3 packets of tobacco (loose-leaf, not in the form of cigarettes) and the bark of Acacia catechu should also be included as part of the offering plate (these are commonly sold in stores as a set), along with 9 sticks of incense and a pair of candles. When making the offering, still your mind, and reflect upon Luang Phor Ngern and his virtues. Then proceed to pray, and make your wish/request.

Katha for Travelling (To keep you safe from harm)

Below are some pictures showcasing the range of amulets that were found. 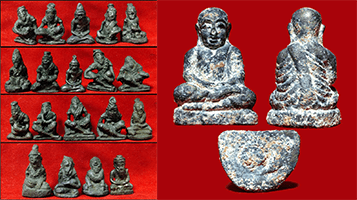