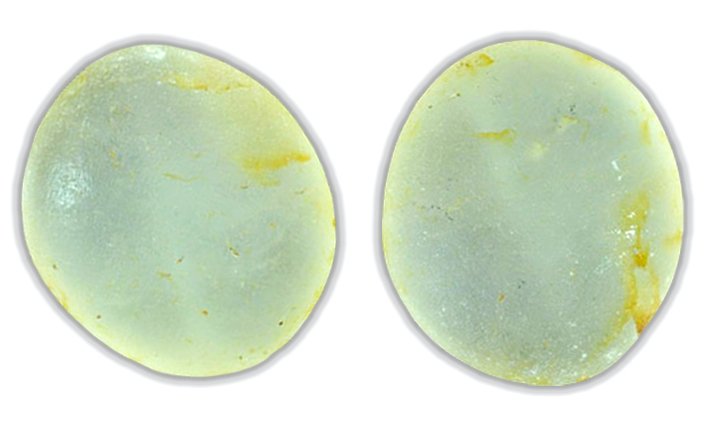 (Pali: Pathavī-dhātu) is the Thai name for the Earth element, or in a manner of speaking, the base matter of all solid things. In the Buddhist belief, there are four elements that constitute the universe: Pathavi dhatu (Earth), Apo dhatu (Water), Vayo dhatu (Air), and Techo dhatu (Fire). They do not confer a literal meaning but a more esoteric concept of each; solidity or mass (Earth), fluidity and adhesiveness (Water), movement or cohesiveness (Air) and Temperature (Fire).

“Pathavi That are considered a gift from these mystical water dragons.”

The corporeal manifestation of the Pathavi That, is actually said to be a river stone that has been polished by nature for thousands of years, becoming smooth and translucent. The stone should be retrieved from the Mekong River, from an area designated by Luang Phor Kamphan

. Once collected, it must only to be used for the consecration ceremony and nothing else. Luang Phor Kamphan ascertains the location of each of the stones through psychic messages from the Nagas, and each is considered a gift from these mystical water dragons.

“The stones are known to attract good fortune and repel negative forces, akin to having your own personal Naga guardian.”

Each of these stones is sacred in its own right, belonging to a class of That Kaiyasit

(psychic elements) rivalling the mysterious Lek Lai. When consecrated through prayer and imbued with energies through the intense focus of a master, also known as “Atithanjit” (a concentrated form of mental will), the stones take on mythic qualities far surpassing those of Leklai. The stones are then known to attract good fortune and repel negative forces, akin to having your own personal Naga guardian.

These stones are said to be bursting at the seams with Klaew Klad, Kongkrapan, Choke Larp, and Metta Mahaniyom. They may be immersed in water to consecrate holy water, which provides a cure-all for rinsing away black magic. When carrying the stone on your person, ensure that it is constantly in touch with your body occupant’s body, as the warmth and proximity ensure that it stays extremely effective.

The History of Pathavi That

Luang Pu Kamphan had been blessing Pathavi That since 1952. He told his disciples that he had received the manual surrounding their craft when he was a young monk when a man presented it to him on the orders of his father prior to his death.

That textbook was written in a language named Aksorn Tham

, which was considered an elite language, only used in the most elevated of spiritual tomes. It prescribed the method for creating Pathavi That, and how to transform seemingly ordinary objects into sacred artefacts imbued with immense spiritual energies. Luang Phor Kamphan was meticulous, taking great pains to absorb and practice every single detail contained within. Later in his life, Luang Phor Kamphan handed this manual on to another monk. The current whereabouts of this book, however, remain unknown.

The conditions for a Pathavi That are described in great detail within the tome. It must be a stone that is retrieved from the river, and not from land.  Said stone must be in immaculate condition, free from any chips, cracks, blemishes, or imperfections. Perhaps the most important hallmark to be observed is that the stone should be translucent. Such Pathavi That is considered to be the most highly-prized for their rarity. A Pathavi That may also only be consecrated through “Atithanjit” by a practitioner of Vipassana only, and not a practitioner of the esoteric arts of sorcery or black magic.

Because of the scarcity of these sacred stones, Luang Phor Kamphan’s disciples often presented him with inferior blemished stones from the riverbed. Through sheer spiritual aptitude, however, the master was even able to consecrate these stones as Pathavi That, surpassing even then stipulations of the source text.

Creating the Pathavi That

In 2007, Thailand was in the grip of widespread terrorism, making for an unsteady living for the police, military, and even the common folk. They sought out Luang Phor Kamphan for blessing and protection from these terrifying forces. He instructed devotees to collect stones from the Mekong River for him to consecrate through Atithanjit. In addition to adhering to the prescribed protocols he had always followed, he also invoked the Katha Chinnabanchorn

(a spell named “The Armour (Cage) of the Conqueror” in Buddhism), and incorporated a further Pathavi That spell from the Venerable Chao Khun Nor. The resulting amulets were said to be as potent as Phra Kreung. This hitherto unheard-of Pathavi That was christened “Phra Phet”, or “Diamond Monk”.

“The most mystical of spiritual protections lay in prevention rather than avoidance.”

He further imbued each with energies to protect their owners from danger, man-made or otherwise, including all weapons past, present, and even in the future. Each amulets blessings were said to be all-encompassing, referred to as Krob Jakawan

in Thai. As he explained to his disciples, the most mystical of spiritual protections lay in prevention rather than avoidance. Additionally, the Pathavi That themselves were considered “cold” element, offering effective countermeasure to “sudden heat”, such as fire, lightning or explosions. Luang Phor Kamphan considered these top be the finest Pathavi That that he had ever created.

Head And Shoulders Above The Others

Pathavi That crafted from the special stones retrieved from the Mekong are considered treasures from the Naga, and as such, are bestowed with a level of prestige befitting their mystical origins. Luang Phor Kamphan’s own baramee, in conjunction with the raw primal power of the Naga, make these stones tremendously powerful.

It is believed that each Pathavi That has its own dedicated spiritual serpent-guardian. This cannot be replicated by man, as the guardians themselves choose to offer this protection. Stones formed by nature hold the energies imbued over millions of years, and normal amulets shaped by the hands of man can never hope to replicate this.

“Stones formed by nature hold the energies imbued over millions of years.”

It is for this reason that masters of the genre turn to nature as their source, and only craft Pathavi That for their disciples in order not to dilute the primal fury that imbues them with their powers. Some monks who strictly adhere to this belief are Chao Khun Nor of Wat Debsirin Temple

In essence, for Pathavi That, this melding of the mind, matter, and the raw power of nature is what makes them unique, and difficult or impossible to replicate through man-made means.

Effective worship of Pathavi That

Though Luang Phor Kamphan prescribed that his Pathavi That were to be in close contact with the body, and its warmth and odours at all times, he also made concessions regarding them being sealed in protective plastic. An exposed frame, however, remains the preferred method of use for this sacred object, as this allows the elements of the body to be in contact with the elements of the amulet, supporting each other’s energy in the process. It grants the owners all their wishes and desires, through simple force of will.

If kept at home, however, a Pathavi That should be immersed in pure water and nestled upon an altar or high place in the house. Small doses of perfume, or Jasmine and other fragrant flowers may be incorporated into the water. If flowers are used, they may only be added on Buddhist Uposatha days and must be removed the next day. Allowing them to degrade in the water is a strict no-no.

Light 7 sticks of incense, chanting the Katha Pathavi That of Luang Pu Kamphan

You may finish here, or continue to chant common Buddhist prayers or the incantations below, which should be recited for each Pathavi That.

The spell to invoke the power of the four elements

For Katha Pathavi That, you may opt to chant the short or full version. Focus the mind on the Buddha, Dhamma, Sangha, your parents, teachers, Luang Pu Kamphan, and the serpent guardian of Phra That Phanom

and Phra That Mahachai, along with all serpents inhabiting the Mekong River. After you have completed your Katha, freely share your wishes with your spiritual patron, and all your desires shall be granted.

Whenever the water in your display needs changing, the old water may be sprinkled around your house or splashed onto the roof for auspiciousness, and protection from misfortune.

It is also widely known that the Nagas personally intervened in the protection of Phra That Phanom (restoration of collapsed pagoda together with the joint efforts of Laos) and Phra That Mahachai (which Luang Pu Kamphan spearheaded the building efforts for).

7 Guardians at Phra That Phanom

7 of these serpents are said to protect Phra That Phanom itself. An incident that occurred in 1957 might offer some proof of this phenomena. On a stormy night, villagers from the area surrounding the temple saw a peculiar, seven-coloured beam of light shooting from the north towards Phra That Phanom, before promptly disappearing. Following the incident, a novice monk named “Sap

” was possessed by one of the serpents, who told the abbot of that time that there were 7 serpents protecting the Phra That Phanom. This legend gave rise to the annual worship of the 7 Nagas at Phra That Phanom, occurring on the 5th day of the 11th waxing moon.

5 Guardians at Phra That Mahachai

Phra That Mahachai is said to be guarded by 5 Nagas. This was communicated to Luang Phor Kamphan during a meditation session in where he sought to reach out and connect with the Nagas.

A Naga once conveyed to Luang Phor Kamphan that they wanted their treasure back, but Luang Pu informed him that he had no treasure, only the Dhamma. Impressed, the Naga sought his assistance to uphold the precepts, as well as serving as the guardians of the temples they guarded.

5 Guardians at the Well inside Wat Pa Mahachai Temple

While practising Vipassana, both Luang Phor Kamphan and his disciples often saw visions of a serpent rising from the well on the temple ground. In celebration of this omen, they chose to erect a pagoda over that exact site to venerate the Nagas.

At the design stage, Luang Phor Kamphan had intended to venerate 7 Nagas on the site of the well, in accordance with the beliefs he held from his experiences at Phra That Phanom, but a strange event caused him to change his mind.

While in Vipassana, he saw a vision of 5 serpents spreading their hoods in front of him like fierce cobras. After his vision, workers on the site were visited by 5 snakes. They even began to have dreams involving 5 serpents. Seeking clarity, Luang Phor Kamphan reached out to the Nagas through meditation, who informed him that only 5 Nagas guarded the site.

The stories contained herein are drawn from folk tales common to the border regions of Thailand, where myth and mystery exist side-by-side with story, truth, and tradition. Though difficult to verify, these stories offer some insight into the culture and spiritual history of the region and their close affiliation with forces beyond our comprehension. There are many other Naga stories featured on this site, which you can read here. Don’t be fooled by your eyes however, we believe that much of what we cannot immediately see, may hold truth and guidance that we cannot immediately experience. Much like our brains simplify only 7 colours of a rainbow to allow us to comprehend the wonders of creation, it is through the pursuit of an open mind and broadened horizons, that we may truly, come to see much more.