by Luang Pu Yiam of Wat Nang, Thonburi, is legendary in the amulet world, and is one of the rarest, most sought-after amulets in Thailand.

or Phra Phawana Kosol (Yiam) was a native of Bang Khun Thian, Thonburi, Thailand. He was born on October 5, year 1832 (the reign of King Rama 3) and was the son of Mr. Thong and Mrs. U. In 1844, his parents brought him to study at Wat Nang until 1854, when he ordained at Wat Raja O Ros. He was a serious, diligent student of the Dhamma.

After completing his studies and ordaining, he moved to Wat Nang Nong

, and became a disciple of Luang Pu Rod, famous for his prowess with the arcane arts. Luang Pu Yiam cultivated a keen interest in occultism and became a close student of the teacher.

At the end of the reign of King Rama 4, Luang Pu Rod’s ecclesiastical rank was removed, and he became a regular monk. He relocated to Wat Konon

In 1898, King Rama 5 made a request to Luang Pu Yiam, to move to Wat Nang temple. A year later, the King bestowed a royal honour upon him as the prelate Phra Phawana Kosol (Yiam), even revering Luang Pu as a teacher. He lived at Wat Nang temple for around 27 years, before passing away on 26th April 1926, at the ripe old age of 94.

Luang Pu Yiam, Wat Nang is revered as a patriarch, not only by Kings, but by commonfolk as well. The sacred objects he crafted in his lifetime, were regarded as exceedingly potent. Because of miraculous accounts associated with ownership of these items, they are tremendously expensive today. He crafted amulets in many forms, such as Rian, Phra Pidta, Mark Tui (an amulet resembling fruit), and Takrut.

According to the historical records, as well as existing evidence, he made these takrut from various metals such as Takrut Nur Thongkam

Takrut Thongkam (gold) and Takrut Ngern (silver), were reserved solely for royalty, bureaucrats, or the servants of His Royal Highness. This was because these takrut were made from gold and silver plates presented to him by the royal household. The common folk could not afford such extravagance, and as a result, the endlessly compassionate Luang Phor also made the Takrut of copper and lead for distribution to them.

The Akara and Yant that inscribed on the Takrut, is Yant Mongkut Phraputthajao

. It is a sacred talisman, that has existed since ancient times. The name Takrut Mongkut Phraputthajao is derived from the spells used in its creation.

After inscribing Yant Mongkut Phraputthajao, the takrut are knitted with rope, masked with Phong Puttakoon (refer to our article on Phong Wiset to learn more), and coated with Rak. The outside has a dry, uneven finish, which makes the amulet appear almost fossilized. This is due to the application of Rak, a lacquer derived from the Chinese Lacquer Tree (Toxicodendron vernicifluum). Surviving examples of these Takrut are often over a hundred years old. 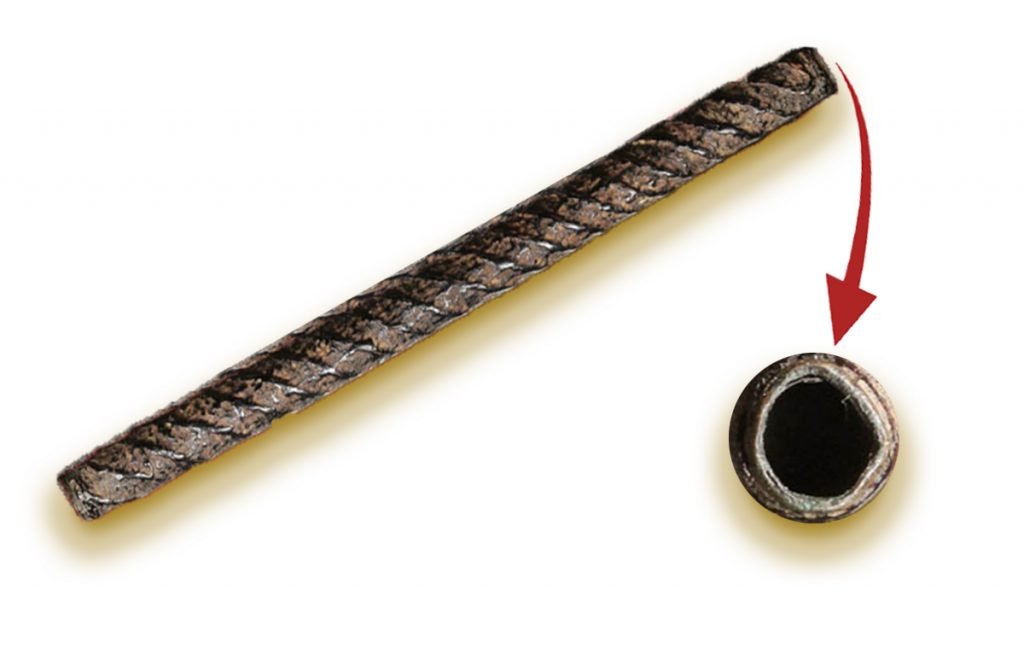 It is difficult to precisely identify the methods and materials used in the creation of these Takrut, owing to their advanced age. Surviving examples vary in condition, according to the amount of use (and abuse) they have endured. Potential buyers would be wise to exercise caution, and carefully examine their purchase before committing, as fakes abound.

The potency of this Takrut is all-encompassing, comprising every from Kongkrapan Chatree, Maha Ut, to protection from black magic and evil; preventing attacks from animals, curing ailments, and even Metta Mahaniyom, and Choke Larp. The manner in which it affects your life is entirely dependent upon the wishes of the wielder.

This spell is called “ii ti pi so reun tie

”, a spell that Luang Pu gave King Rama 5 to calm his skittish horses when he travelled across Europe to build goodwill.

As the story goes, King Rama 5 went to meet and consult with Luang Pu Yiam before departing on his journey. Luang Pu Yiam blessed him and predicted that in this visit, all royal duties would be accomplished without a hitch.

Luang Pu however, foresaw that the King would have to ride an animal with fierce temperament as part of his jourmey, but would emerge from the experience unscathed. To ensure this, Luang Pu gave him a Katha to recite.

During a Polo event in France, some of the horses became extremely skittish, threatening to grind the event to a screeching halt. One of the princes asked King Rama 5 on how they controlled such a wild horse in Thailand. King Rama 5 remembered the spell that Luang Pu Yiam had given him, and ordered the jockey to bring the horse to him.

He picked up some hay and recited the Katha, then fed the hay to the horse. The horse miraculously calmed down, even allowing the King to ride him. This situation astounded everyone present, and they were all awed by the King’s seemingly supernatural abilities. This gave rise to the name “katha sek ya hai ma kin

” which means, the spell of feeding grass to the horse.

Many similar spells exist in Buddhism, but it is important to note that they are merely additions to, and not the primary focus of, your journey in the faith.

“Now, Kalamas, don’t go by reports, by legends, by traditions, by scripture, by logical conjecture, by inference, by analogies, by agreement through pondering views, by probability, or by the thought, ‘This contemplative is our teacher.’ When you know for yourselves that, ‘These qualities are skillful; these qualities are blameless; these qualities are praised by the wise; these qualities, when adopted & carried out, lead to welfare & to happiness’ — then you should enter & remain in them.”- Kalama Sutta

Perhaps more importantly than divine intervention, in Buddhism, your own actions have a much larger role to play in the eventual outcome of your life’s journey.