Pathavi That: The “Naga Pearl” of Luang Pu Kamphan

or Luang Pu Kamphan Khosapanyo was the founder of Wat That Mahachai, Plapak district, Nakhon Phanom province. He was nicknamed the “God of the Mekong River” and the villagers praised him for his lofty achievements in meditation and knowledge of the Dhamma. He is perhaps most renowned for his mastery of Pathavi Kasin (the power of meditation focused on the earth element), and for his alchemic knowledge. His fame straddles both coasts of the Mekong, and he is famous throughout both Thailand and Laos.

. He was born on January 10th, 1915, on a Monday, the 6th day of the 2nd waxing moon in the year of the Rabbit. He was born in Na Kae District, Nakhon Phanom Province, the son of Mr. Ken and Mrs. Lom Srisuwong. In his childhood, he was a neat and hardworking boy. He helped on his parent’s farm until finally being ordained as a novice monk.

Entry Into the Sangha

“The breath serves as an important bridge between the mental, emotional and physical aspects of any living being.”

, who had come to train people at Phon Mueang Temple,  in Ubon Ratchathani Province. The master taught him to meditate by “setting the breath” and opened his eyes to breathing that would be at the core of meditation practices. Without breathing, as explained, there was no life, and breathing, therefore, served as an important bridge between the mental, emotional and physical aspects of any living being.

LP Kamphan also studied under the renowned meditation master for a year, and throughout his life, would constantly defer to him and his teachings as the source of his meditative prowess.

3 years after ordaining as a novice, LP Kamphan hiked to Loei

province accompanied by two monks, Boon and Wan. They met with a white-robed ascetic named Krut, and stayed to study meditation from him for about 3-4 months.  Krut’s teachings were so integral to his practice, that he incorporated many elements of them into his own methods.

LP Kamphan remained in Loei Province for a year, before decamping to Chiang Rai, where he stayed for a further 3-4 months. After receiving news that his father had passed away, however, he returned to attend his father’s funeral, and to his old temple in Na Kae

Ordaining As A Monk

In 1935, at the age of 20 years, LP Kamphan ordained as a fully-fledged monk at Wat Phra Phutthabat Chom Thong

In 1939, when he was 24 years old, his mother passed. At that time, he had two younger sisters who were still very young and unable to fend for themselves. Heeding the call of duty, LP Kamphan left the monkhood to care for his sisters.

He was conferred the name Khosapanyo which means “the propagator of wisdom far and wide”.

LP Kamphan continued to hone his skills at meditation, while also serving as a teacher of Tipitaka Dhamma studies at Wat Phra Phutthabat Chom Thong

, Baan Nong Hoi Yai, Na Kae Subdistrict, Na Kae District, Nakhon Phanom Province. He also took to the practice of a wandering mendicant and travelled the various provinces of Nakhon Phanom, Sakon Nakhon, Udon Thani, Nong Khai, and even crossed over to Laos for about 3-4 months.

He returned to settle at a Wat Pa

(a term used to describe a temple located in the forest) for Buddhist Lent and remained there for about 3 years, after which the villagers invited him and his fellow monks to reside in the temple of their village and offer spiritual guidance. After that experience, he continued his wandering ascetic practices until he was 40, before finally settling down for good, all while continuing his unending pursuit of spiritual wisdom.

The Humble Beginnings of Wat That Mahachai

to build a new village, and christened the new village “Mahachai”. On the same site, he raised a temple, the present-day “Wat That Mahachai” (formerly known as Wat Khosakaram), which is still an important spiritual centre today.

Day, May 25th, 1975, King Bhumibol Adulyadej along with Queen Sirikit of Thailand, interred a selection of precious relics in the Mahachai pagoda. Accompanied by a large entourage of people, the King led a candlelight procession around the pagoda. This event sealed the renown of Luang Pu Kamphan and Wat That Mahachai forever, making it revered across Thailand.

A Summary of Credentials

In 1936, at the age of 22, he graduated from Beginner Level Dhamma studies “Naktam Chantree

In 1945, at the age of 30, he graduated from Intermediate Level Dhamma Studies “Naktam Chantoh

In 1946, at the age of 31, he graduated from Advanced Level Dhamma Studies “Naktam ChanAke

A Man of Many Talents

pagoda suddenly collapsed. Upon hearing the news, villagers scrambled to loot the treasures interred within.

Many of those who sought spoils from Phra That Phanom began to experience unusual phenomena. Some began to hallucinate, and yet others began to have visions of angels and spirits (and some say Naga

) who beseeched them to return the stolen artefacts to their rightful place. Some persevered, adamant about holding on to their newfound riches, and were driven to madness or death. Many of the treasures were returned by surviving family members, desperate to rid themselves of the curse. After the treasures were returned, some people’s symptoms got better, while others remained the same.

LP Kamphan took it upon himself to investigate the source of the collapse. Sifting through the ruins, he found a talisman written under the base of the pagoda, which he later incorporated into his amulets. As he later recounted to a close disciple, this spell had been written in the language of the heavens, a spell he came to refer to as Phra Katha Maha Pratthana

, which means to fulfil one’s wishes,

In a Lao accent it may be read thusly:

No Ye Na Ye No

A monk from Nakhon Phanom Province (see Footnotes 1) presented Luang Pu Kamphan with a selection of holy artefacts, hoping that his pure merit and morality, would allow him to successfully incorporate them into his amulets. An ancient bronze casket and the holy relics of the Lord Buddha became the integral ingredient in LP Kamphan’s Phra Kring Khosapanyo.

A Manner of Moral Cultivation

LP Kamphan was known for being kind, generous, calm, and compassionate towards everyone around him. He was endlessly humble, and never one to turn away anyone in need of guidance or assistance. It was for this reason, that it became easy for people to revere and respect him.

Because of his upstanding reputation, every project he was involved in had no trouble finding the finance and resources they needed to see them to fruition. Whether through money or manual labour, people gravitated towards the master and pitched in however they could. A serious and steadfast man, LP Kamphan found time throughout all these projects to continue practising and tutoring meditation.

The Passing of a Great Man

After a prolonged period of illness, LP Kamphan passed away peacefully on Sunday, November 24th, 2003, around 2 AM, in his cubicle at Wat That Mahachai

, at the age of 89 years old (having completed 59 Pansa). The loss was mourned by a legion of disciples, devotees, and people whose hearts and minds had been touched by his extraordinary life. 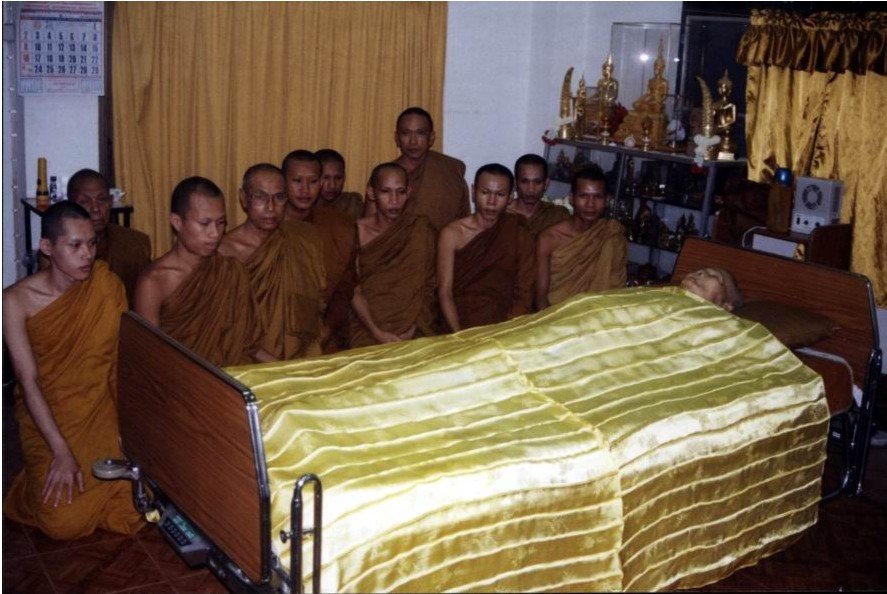 Herein is a condensed account of the life of a true master and adherent of the Buddhist faith. More information about him is also available on the official website of Wat Pa Mahachai